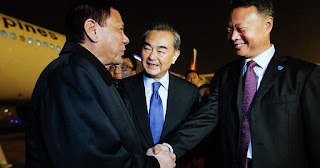 BEIJING - Do not expect the Philippines to enter into new military alliances, said President Rodrigo Duterte during his four-day state visit in China.
Speaking before members of the Filipino media at a hotel on Wednesday, the President pointed out that he does not intend to break old ones.
“There will be no military alliances entered into. There will be no military alliances broken. What I am just saying is that we are not interested in adding fuel to what is already a volatile world,” he answered, after he was asked about a possible military alliance with Beijing.
“When I said that there is no such thing as allowing the missiles there or missiles there, I would not allow it.  And I have repeatedly said, anybody who wants to think about or talk about Third World war and even a conflict on a regional level, low intensity thing, it would not promote anything. I am not into that,” the President said.
Duterte also warned of consequences should conflicts among countries with nuclear weapon intensify.
“And if you talk about America, Russia, vis-à-vis China, Great Britain, France, Iran, Pakistan, India, there is a conflict going on, it’s getting hot. And if you think that if those nuclear bombs will explode at the same time, then we might not be able to board our last men out of China because it will just simply end the world,” he said.
“So what’s the point of talking about…Why should I borrow missiles or ask for nuclear bomb? For what? They were just crazy people who would want to pull a stack on a matter of national pride,” Duterte said of getting new military alliances.
Also at an earlier event, Foreign Affairs Secretary Perfecto Yasay Jr. did not mince words when asked about the possibility of getting armaments during the China trip.
“We are not talking of war here. We are talking of peace. Come on. Dissociate that from your mind. We are interdependent of every nation all over the world so far as our economic development is concerned. That’s the nature of things,” he explained.
"In fact, military alliances—especially so we are able to find solutions in making sure that the peace of the world would be assured, we will not probably (be) relying on military alliances anymore. And that should be our objective," Yasay stressed. — BAP, GMA News
http://www.gmanetwork.com/news/story/585716/news/nation/phl-will-not-enter-into-new-military-alliances-nor-break-old-ones-duterte
Posted by La Solidaridad at 10:45 AM