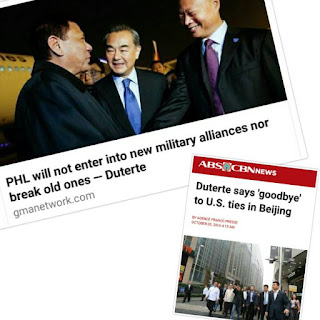 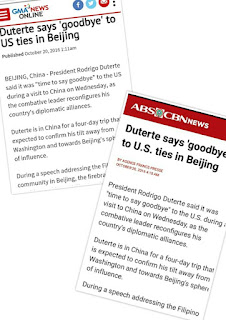 1. Hindi lang pala ABS CBN ang nag publish ng nasabing news, so did GMA. Both relied & both bought the news from Agence France-Presse (though GMA did not indicate so).
2. Both carried the same exact headline and the same exact content (word per word per word!).


In my previous post, I never questioned the contents as I think they were relatively based on Duterte's speech to the media. What I questioned was the headline which I found misleading.
Nonetheless, I stand corrected for comparing one article to another when both news outlets published the same EXACT report, after all. What made it confusing is that another article from GMA published at almost the same time showed an entirely different story--one where Duterte affirms we are not breaking old military alliance.
It appears now that his statements made on 3 different occasions, over 3 different audience (1. Filipino Community, 2. Press, 3. Chinese Govt. & Chinese Businesmen) in Beijing have 3 different tones--and obviously, with 3 different objectives.
[The 3rd speech was made several hours AFTER my earlier post. My post pertains to 1st & 2nd speeches where he NEVER really said he is cutting ties with US. It was only mentioned on the 3rd occasion which happened after my post.]
At this point, many would see Duterte as someone impulsive, unreasonable, fickle-minded, or maybe even stupid for his backtracking and often confusing rhetorics.
For some of us, we see it as his creative way to butter up China and to get the most from the two superpowers--a 'shrewd negotiating technique' as some political strategists and analysts put it.
Personally, I think he’s just trying to get the most benefits for our country and do what he believes to be good for his countrymen.
With his recent pronouncements, we can expect one of two possibilities:
» Best Scenario: US will be kinder, more generous to Phils. They will offer better concessions and try to win us back from China.
» Worst Scenario: Duterte could be EJK-ed... (Extra Judicially Kicked! or Killed?)
Our President has foreseen this. He knew the possible consequences of his actions and decisions. This must be the reason why he kept saying:
"I risk my honor, my pride, my life, and the presidency."
He is not stupid, after all.
He knew.
I can only hope he plays his cards right.

Posted by La Solidaridad at 5:54 PM