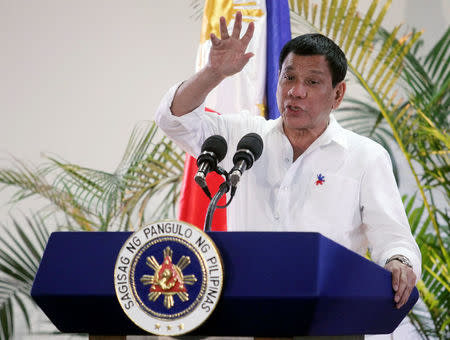 (Note: Obscenity in paragraph nine)
MANILA (Reuters) - Philippine President Rodrigo Duterte has made a promise to stop swearing, saying God spoke to him during a flight from Japan on Thursday and warned him the plane would crash if he kept using bad language.
The maverick former mayor, famous for his profanity that has included outbursts aimed at Pope Francis and U.S. President Barack Obama, said he heard a voice and realized it was God, telling him to clean up his act.
"I was looking at the skies while I was coming over here ... everybody was asleep, snoring, but a voice said that, 'you know, if you don't stop epithets, I will bring this plane down now'," Duterte said at a news conference late on Thursday upon arrival in his home city of Davao.
"And I said, 'who is this?' So, of course, it's God. OK.
"So, I promise God ... not to express slang, cuss words and everything."
Duterte, a former outspoken city mayor, emerged as a brash, crass, alternative candidate in a May election which he won by a big margin, owing much to his earthy style and promises to tackle problems important to ordinary people, like drugs and crime.
Advice to act more presidential once he took office was not heeded for long, however, and he resumed his eruptions of profanity with gusto when he started hearing foreign criticism of his deadly drugs war.
He has called U.S. President Barack Obama a "son of a bitch" and chose the same words when criticizing the pope.
He told Obama to "go to hell", called U.N. Secretary-General Ban Ki-moon a "devil" and said "fuck you" twice to the European Union, while raising his middle finger.
In Tokyo on Tuesday, Duterte used the same language when speaking about his anger with foreign criticism of his drug war.
It was not the first time Duterte has spoken of his connection with God, whom he said had made him president.
Alan Peter Cayetano, Duterte's vice-presidential running mate and now his foreign affairs adviser, said Duterte was tired and appeared pensive during the flight back from Japan.
"He felt it was a message from God," Cayetano told reporters on Friday.
"I've always felt he's a deeply spiritual person, he's not religious, but he believes in God."
The Philippines is predominantly Roman Catholic.
(Reporting by Martin Petty; Editing by Robert Birsel)
https://www.yahoo.com/news/philippines-duterte-says-god-warned-him-off-swearing-083224434.html
Posted by La Solidaridad at 5:21 PM