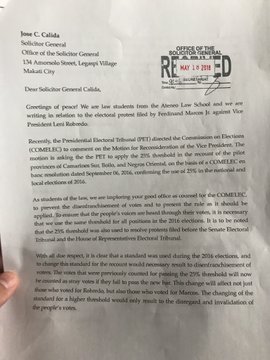 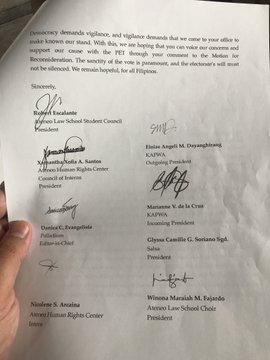 Twitter Ads info and privacy
The motion asks the Presidential Electoral Tribunal to apply the 25 percent threshold in the recount of the pilot provinces of Camaraines Sur, Iloilo and Negros Oriental, on the basis of a Comelec en banc resolution dated September 6, 2016.
“As students of the law, we are imploring your good office as counsel for the Comelec to prevent the disenfranchisement of votes and to present the rule as it should be applied," the letter read.
The 25 percent threshold "was also used to resolve protests filed before the Senate Electoral Tribunal and the House of Representatives Electoral Tribunal," the students said.
"To ensure that the people’s voices are heard through their votes, it is necessary that we use the same threshold for all positions in the 2016 elections," they said.
Both Marcos and Robredo are expected to lose some votes should the 25 percent threshold be changed.
"The changing of the standard for a higher threshold would only result to the disregard and invalidation of the people’s votes," the students said.
Calida is a known supporter of Marcos. In 2016, he was part of the movement that backed the unofficial Duterte-Marcos tandem for the presidential and vice presidential polls.
Ateneo student leaders said they still hope that Calida would still heed their request even if he campaigned for Marcos prior to his appointment as the government's lawyer.