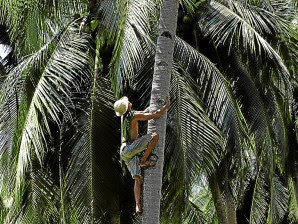 TREE OF LIFE. A farmer in Dumaguete City climbs up a 20-foot coconut tree to gather coconut sap known as tuba which his wife will cook into coco sugar or ferment into coconut gin called “lambanog” to provide livelihood to his family. The tree is known for its many other uses, which makes it one of the most versatile trees in the tropics. Coconut Week ends Sunday with an exhibit and sale of coconut products at SM Megamall in Mandaluyong City. MANDY NAVASERO/CONTRIBUTOR

After previous claims as an antiseptic, AIDS cure, anti-infective, cholesterol-basher, and remedy for various aches and pains, coconut oil is now being hailed as a possible miracle cure for Alzheimer’s.

The American physician, who has been dubbed “Dr. Coconut” for his tireless research into and championing of coconut oil’s healing properties, is back in the country bringing the latest breakthrough in the management of Alzheimer’s and other neurological conditions.

Fife has written all about it in his book, “Stop Alzheimer’s Now.”

Newport was diagnosed when an MRI scan showed his brain had shrunk, a classic case of Alzheimer’s disease, the progressive, degenerative form of dementia that involves the loss of brain functions and extreme behavioral changes.

Newport’s wife Mary, who is a neonatal doctor at Spring Hill Regional Hospital in Florida, then began a relentless quest to seek a cure that would arrest his deterioration.

“It has been a nightmare to watch his decline and I feel helpless to do anything but watch it happen,” said Mary.

In May 2008, Mary stumbled on a company that was enlisting volunteers to test a new drug for dementia-stricken patients. But like all experimental drugs, the company preferred subjects with moderate forms of the disease, based on how they scored in the MMSE (mini-mental state exam), a standard test of mental status used to screen for Alzheimer’s.

Newport took the test twice and failed. He scored too low, shown to be on the border of severe dementia, to qualify as an experimental subject. Mary was devastated.

Possessed of a research background, Mary was able to dig up the results for the new drug called AC-1202 (later known as Axona). She learned from the journal, BMC Neuroscience, that the active ingredient in the drug was MCT (medium-chain triglycerides), an oil that is used to treat epilepsy and also placed in hospital feeding programs for newborns.

Bingo! She knew as a pediatrician that babies needed to develop their brains with the right brain foods and MCT was found in great quantities in VCO, the oil extracted from the fresh meat of coconuts.

Intuitively, she started Newport on a feeding program. Instead of using Axona at $100 per month with 1 dose a day, Mary used VCO—at a cost of $10 a month—giving him 2 tablespoons of a mixture of VCO and its pharmaceutical isolate, MCT, with every meal.

Because of the high amounts of saturated fat in this diet, some have expressed concern about how this could affect blood cholesterol levels.

According to Fife, Newport’s tests have dispelled this notion and in fact his cholesterol levels have actually improved with the good cholesterol (HDL) going up and the bad cholesterol (LDL) going down.

In 18 months, Newport’s severe dementia was totally arrested. He scored high enough in the MMSE tests to be considered to be in the mild range of Alzheimer’s.

Inspired by her husband’s recovery, Dr. Mary Newport travels all over the United States telling her story of hope and persistence. She encourages the medical scientific community to keep on with their research into the use of MCTs as a therapeutic aid in treating Alzheimer’s, as well as Parkinson’s disease, multiple sclerosis and other neuro degenerative disorders.

In March 2009, the experimental drug AC-1202 was renamed Axona and approved by the US Food and Drug Administration as a medical food for treatment of Alzheimer’s disease with no therapeutic claims.

When Axona finally came out, it caused intestinal distress and diarrhea among some patients. Others reported that the drug’s effects wore out after only a few hours that they still had to take coconut oil to maintain their ketone levels. Ketones are organic compounds that result when body fat is broken down for energy.

Fife explained that drugs become ineffective after some time and coconut oil, converted into ketones, decrease the formation of free radicals that damage the cells. Hence, coconut oil is especially important for those taking medications.

“Following the Newports’ example, many people with neurologic disorders are now incorporating coconut oil into their diets with good results,” said Fife.

He said if any food could be labeled as brain food it would be coconut oil.

According to Fife, coconut oil, converted into ketones, acts as a superfuel to the brain and normalizes brain function, stops the erratic signal transmissions that leads to seizures, and improves cognition and memory.

The MCTs in coconut oil are converted into ketones, which act as high-potency fuel for the brain. The ketone MCTs provide energy to the brain and stimulate healing and repair, he said.

The chemical structure of the MCTs and fatty acids in coconut oil enable them to pass through the blood-brain barrier, which ordinary food or oil cannot break into, he said.

Fife credits his visits to the Philippines as triggering his pursuit of coconut research. He said his first visit in 2004 was an eye opener for him. He was amazed at the warm reception he got from his Philippine audience.

“They were thanking me for reviving the coconut industry,” he said.

It was the economic implications for the people that have spurred Fife to continue his research into the health benefits of this tropical food endemic to the country, so much so that the American health community has dubbed him “Dr. Coconut.”

Fife has established a nonprofit organization, Coconut Research Center, to educate the public on the health and nutritional aspects of coconut. He has documented his researches in two books, “Coconut Cures” (2005) and “Coconut Water” which he has made available online in www.coconutresearchcenter.org.

The author has been active in the coconut industry for 35 years, and is a director of the Philippine Coconut Authority governing board.

Posted by La Solidaridad at 2:56 PM