THE MYSTERIOUS 18 MILLION VOTES OF FRANKLIN DRILON EXPOSED (Must Read) 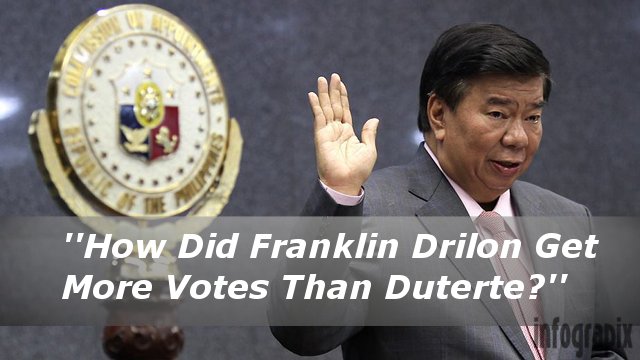 How Did Franklin Drilon Get More Votes Than Duterte?
Yan ang umiikot na mga katanungan sa mga netizens sa mga nag daang araw, Sa mga nag dududa kung paano nga ba nakuha ito Ni Senator Franklin Drilon?
Take a look of Franklin Drilon’s number of votes. Take note that these results are already official. He got 18,153,384 total number votes.
Take a look at Duterte’s total votes. Although not official yet, this is based from the 96.14% of total votes counted via COMELEC and GMA7 Mirror Server.
He got 15,970,018 total number of votes, so far.
What does it say?

It says that of the 4.84% number of votes that haven’t been counted yet should total to 4 million votes, otherwise the count of Drilon and Duterte looks to be illogical.
How on earth did Drilon get more votes than Duterte?

Voters who voted for Drilon didn’t vote for Duterte? Or left the ‘president’ field blank in the ballot? How come those who voted for Drilon didn’t even vote for Mar Roxas, when both are in the same party? Roxas only got 9 Million+ votes so far. Half of Drilon’s 18 Million. How come half of Drilon’s votes didn’t vote for Roxas, or at least Duterte.
Is it really possible that, basing on Duterte and Drilon’s votes, more than 2 million votes left the ‘president’ field blank? What about the vice president? Looks possible that more than a million voters voted for Duterte, but left the ‘vice presidential’ blank.

Looks to me that it’s possible a voter can forget about the senatoriables but never the presidentiables. It was the presidential elections. How can you ever forget to shade your president of choice and go for the senators, or go for only Franklin Drilon?